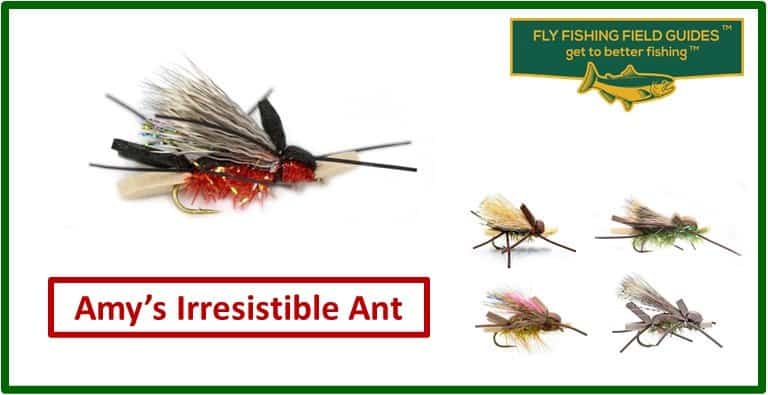 Probably no one at all knows why, but the Amy’s Ant fly simply makes fish lose their inhibitions!

Invented by industry legend Jack Dennis, Amy’s Ant won the Yellowstone Angler One Fly contest in 1999. As a result, the pattern has been carried by Umpqua ever since.  Like most attractors, numerous effective color variations have evolved since then, making it one of the best flies for trout.

You may be trying to carefully match the hatch, but the fish just aren’t buying it. If you start wondering how to catch trout in the first place, then change gears and throw them an Amy’s Ant. They may not know what hit them.

You can fish the AA like any large terrestrial such as a grasshopper, except use it year round, using the following techniques:

When using Amy’s Ant, be ready for quick, hard strikes!

For fly tying, this is an intermediate difficulty fly, requiring a range of skills and several different materials.

We think that this video by Jack Dennis – the creator if this award winning fly – obviously covers it as well as anyone could!

Learn To Tie Amy’s Ant From The Creator Jack Dennis

If you prefer to purchase, here’s an option for you:

The Chubby Chernobyl
Scroll to top