Fall season offers excellent and beautiful fly fishing on many rivers.  These five present incomparable fly-fishing experiences, and are known in particular for their fall fishing.  Late-season can present a series of distinct challenges to anglers.  The hatches taper off, and rivers and streams become lower and clearer making fish spook easier.  At the same time, cooler water makes  trout more active than during summer heat, and vegetation colors are astounding.  In this article, we discuss some of the best destinations to cast your line while the foliage turns vibrant.

A major tributary of the Colorado River, the Gunnison River is home to quality wild and record-sized rainbow and brown trout.  Colorado natives refer to it as ‘the Gunny,’ and many pursue some of the best fall fishing found in the state.  The valley has produced record catches including a 33.5-inch cutbow (hybrid rainbow and cutthroat trout), 26-inch brook trout, 40.5-inch rainbow trout, a 46.9-inch mackinaw, and a 28-inch tiger trout.

In the Gunny’s upper section you’ll find a renowned Kokanee (landlocked) salmon fishery – in fact the largest run in the USA. Meanwhile, the lower Gunny (below the reservoir starting in the Black Canyon) of Gunnison National Park is known for hard hitting rainbows and browns larger than 20 inches.  While you cast your line, you will enjoy the majestic views of ebony schist rock columns.  Notably, these striking natural monuments tower more than 2,000 feet tall against the scenic backdrop.  Be sure to keep your eyes peeled for herds of North American elk and mule deer. 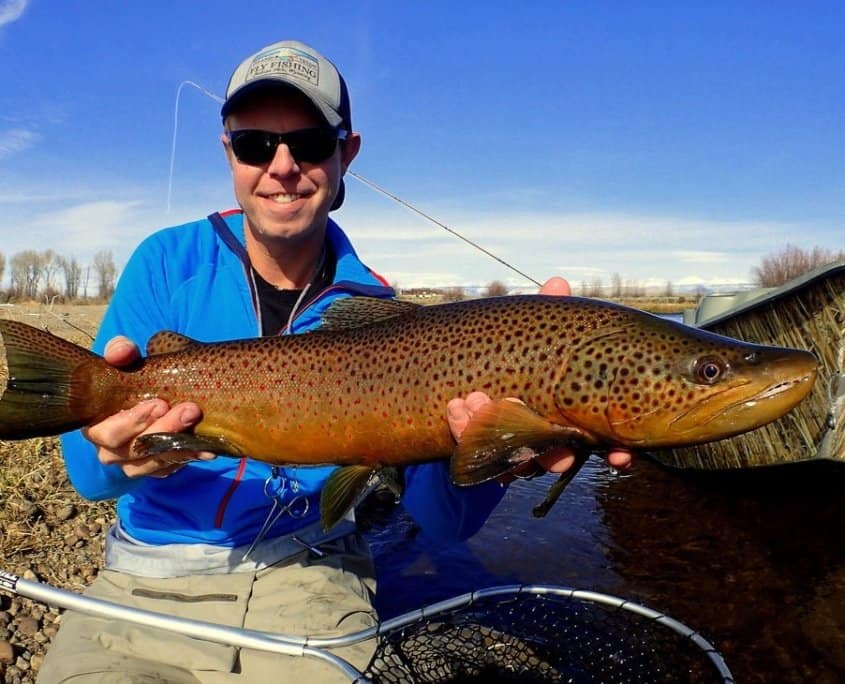 If you love throwing streamers and ‘feeling the tug,’ the Green River can provide you with plenty of opportunities to catch big trout.  You can expect to find some of the largest fish striking during the fall season.  Keep in mind that before the browns start their yearly spawn, they get extremely aggressive.  They will actively chase anything they perceive as an annoyance or threat, especially large streamers.

Certainly “Section A” from the Flaming Gorge Dam to Little Hole is one of the most scenic stretches you’ll see.  Your best bet is to hire an excellent guide who knows where the most productive feeding channels and lanes are.  Be sure to pack heavier fly rods for streamers, at the same time bring lightweight gear with some small mayflies.  Towards the latter part of the season, you might be able to bring trout to the surface using mayfly patterns.

Running more than 280 miles from its origin to the Idaho border, the Clark Fork River is one of the longest and most productive waterways in Montana.  Three dams create a series of lakes which dominate the last sixty miles of the river.  The best opportunities lie between the origin of the river and its confluence with the Flathead River near Paradise.

During the fall months, while throwing streamers you can expect to catch nice size rainbows and browns.  For this reason be sure to toss your streamers in deeper holes and structure known to hold large trout. Bring different sized gear for different strategies – for fishing nymphs, it is advisable to use a 9’ 5wt fly rod with floating line.  On the other hand, use a 9’ 6wt with a sink tip fly for streamers and larger nymphs. 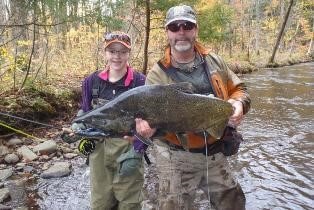 The Salmon River in NY attracts anglers from across the country, for the reasons of its productive and diverse fishing. According to the state Department of Environmental Conservation, anglers spend more than 1.1 million hours on this waterway every year.  Compared at times even to mighty Alaskan rivers, the Salmon yields many large migratory salmon and steelhead catches.  So, as the months get start to get chilly, anglers catch a wide variety of fish, including brown trout, steelhead, coho salmon, and occasionally Atlantic salmon.

Due to the hydrology of Salmon, it contains the largest fall spawning run of all the rivers flowing into Lake Ontario.  As fall colors give way into the deep chill of November, be sure to fish the Salmon and its tributaries for the large brown trout that follow salmon upstream from Lake Ontario to consume roe from spawning fish. 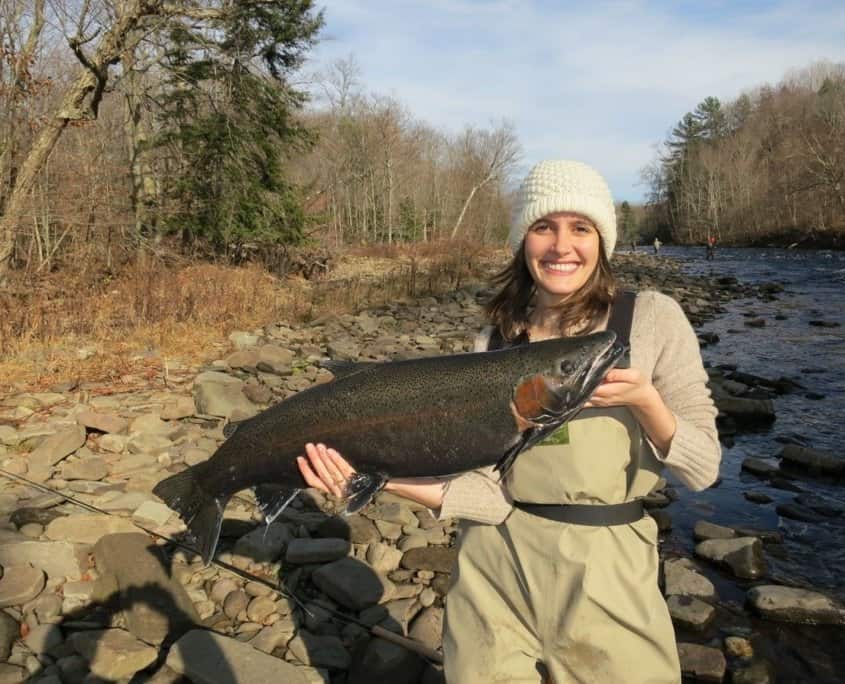 If you are on a mission to fly fish the Lake Ontario tributaries, the Oswego is also a must-visit river, running  through the central part of New York State.  Anglers love this waterway for the many species it offers, including rainbow trout, pike, largemouth bass, steelhead and salmon.

For steelhead anglers, the best time to visit Oswego River is the early part of October. However, you still have a good chance of catching steelhead all the way through the winter to late April. On the other hand, you can start as early as September when you want to find good brown trout.  At the peak of their run from mid-October to late November, the heartiest brown trout you catch can weigh at in the 4 to 18 pound range.

One of the best spots for fly fishing in Oswego River is near Varick Dam. There are small pockets, pools, and runs covering about 1/4 mile of the river. If you plan on wading in the shallow areas, remember to keep your cleats on and to use a wading staff.  After all, slippery shale predominantly lines this part of the river.

Finally, so there you have it…five of the best rivers to cast your line this fall season!  Above all, if you want to suggest other scenic spots for a great catch this autumn, be sure to contact us today.  We are always looking for reader suggestions.