The Royal Coachman – And Its Many Forms 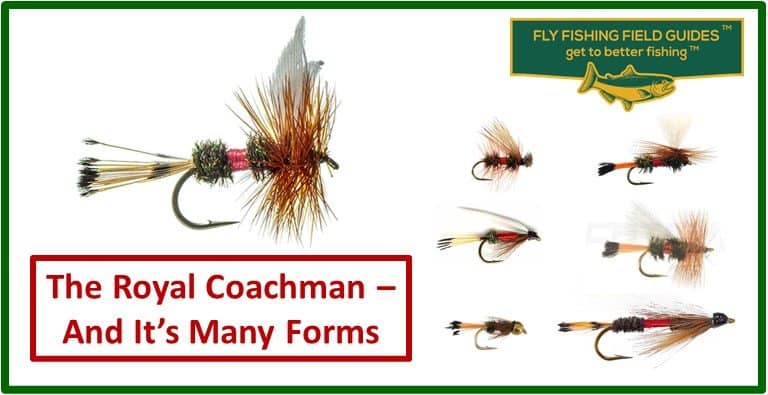 The Royal Coachman fly is a versatile and effective attractor pattern, tied in many forms attractive to trout, grayling, and steelhead.  With an enduring history from England to modern day modifications made in the USA, this pattern must be in your fly box.

Here’s what’s coming up, with jump ahead links: 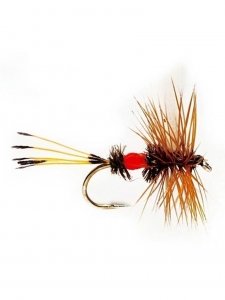 1. About The Royal Coachman

In several descriptive words, the Royal Coachman is classic, versatile, and effective attractor pattern – with a history back to England.

Classic, not only because it’s endured since at least the late 19th century, one of the world’s best-known flies, but also because of its striking appearance.

Versatile, because it can be tied and fished as a dry fly, wet fly, nymph, or streamer pattern.

Effective attractor, because it works well to help locate fish, used for searching and testing fish’s interest when you aren’t otherwise having luck matching the hatch.

A little bit of history – the original Coachman (without the red “royal” body) was tied by an Englishman named Tom Bosworth starting in 1830.  Not only a 19th century flytier and angler, he was actually a coachman for 3 British monarchies.  Bosworth tied the Coachman with a peacock herl body, white wings slanted backwards, and a bit of brown hackle wound just ahead of the wings. Designed for night fishing, like most flies of that period it was fished as a wet.

The first Royal Coachman wet fly variation was first tied by American John Haily, in 1878.  He wrapped red silk around the middle of the Coachman to prevent the otherwise brittle peacock herl from unwraveling.  In fact, when first adapted in America, the now Royal Coachman was originally targeted at brook trout in Maine.

Subsequently Haily made the tail from wood duck, leaving the fly in wet fly form.  From there, the many dry, nymph, and streamer patterns evolved to what is today perhaps the worlds most recognized fly pattern.

Related Article: How To Catch Trout In The Spring 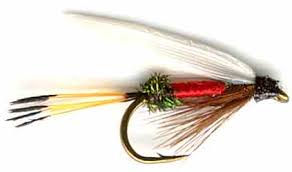 The smaller Royal Coachman patterns (dries, wets, and nymphs) are used primarily for trout and grayling.  The larger patterns (streamers) are also used for steelhead and Atlantic salmon.

Your method of presentation depends on whether you are fishing the dry, wet, nymph, or streamer form.  Standard presentation techniques for these forms will serve you well.

The Royal Coachman is an intermediate difficulty fly, requiring a range of basic skills across several types of patterns.

Beginners can use this pattern to challenge themselves to get to the next level, while experienced fly tyers consider it to be a straightforward pattern.

Find below lots of information on how to tie the Royal Coachman.  If you prefer to purchase, here are several sources and options for you: 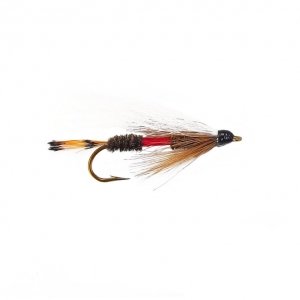 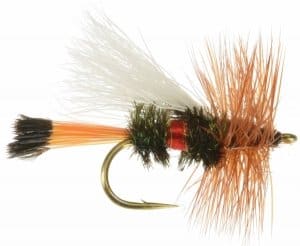 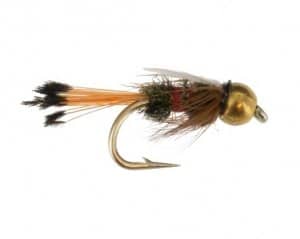 The materials for the Royal Coachman are versatile, given that you’ll be able to use them for numerous other patterns as well.

Here’s a list with multiple sources for the materials you’ll need, roughly in the order you’ll use them.

You won’t need everything in this list, just those for the pattern or variation you are tying (consult the recipe card and variations above).

Be sure to first decide whether you’re going to tie the dry, wet, nymph, and/or streamer patterns, and what size you prefer.

White quill (use turkey in place of mallard) 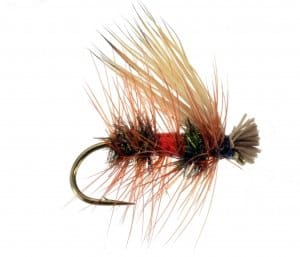 7. How To Tie The Royal Coachman

If you’re an experienced tyer, you can pretty much take up tying the royal coachman by looking at a picture of it.

If you’re relatively new to tying, we suggest starting with the royal coachman streamer fly or wet fly, which give you a little more room for error.  Then when you’ve got the hang of it, move on to the royal coachman dry fly and smaller nymph patterns.

We think that this video by Jim Misiura is a great approach for fly tying beginners to get their arms around this fly, enjoy!

Fly Tying for Beginners – A Royal Coachman with Jim Misiura 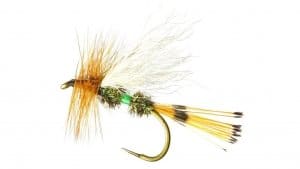 The Royal Coachman is so attractive, even photogenic, that we couldn’t help but show you a couple pieces of art we think capture the classic nature of this iconic fly pattern. 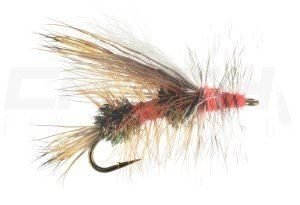 The Royal Coachman is a versatile attractor fly, still very popular today with origins in England.  This classic pattern can be tied and fished as a dry, wet, nymph, or streamer.  It is typically used for trout and grayling, with larger sized streamers used for steelhead.  Intermediate tying difficulty.

What does a Royal Coachman imitate?

The Royal Coachman is used as an attractor pattern, so actually isn’t attempting to match the hatch.  It works well to help find fish and test their interest.  Try it when you start out, or when you’re not having luck matching the hatch, it’s great to put out there.

How do you tie a Royal Coachman wet fly?

The Royal Coachman is an intermediate difficulty fly.  Whether tied as a dry, wet, nymph, or streamer, the basic pattern and materials are similar.  Use golden pheasant tippet for the tail, followed by a body of alternating peacock herl stripe, red floss or thread, then another peacock stripe.  The wings are white deer hair, feather, duck quill, or marabou.

How is the Royal Wulff Fly Pattern Different From The Royal Coachman?

The Royal Wulff started as a modification to the familiar fan-wing-style Royal Coachman, which was at times too fragile for rougher water. It not only uses more hackle, but by the 1930’s numerous color variations developed, including the Grey Wulff, White Wulff, Blonde Wulff, Brown Wulff and Black Wulff.

Is there a Royal Coachman Fly Rod or Reel?

Yes, ….the Royal Coachman reel on the other hand….

More About The Woolly Bugger
Scroll to top