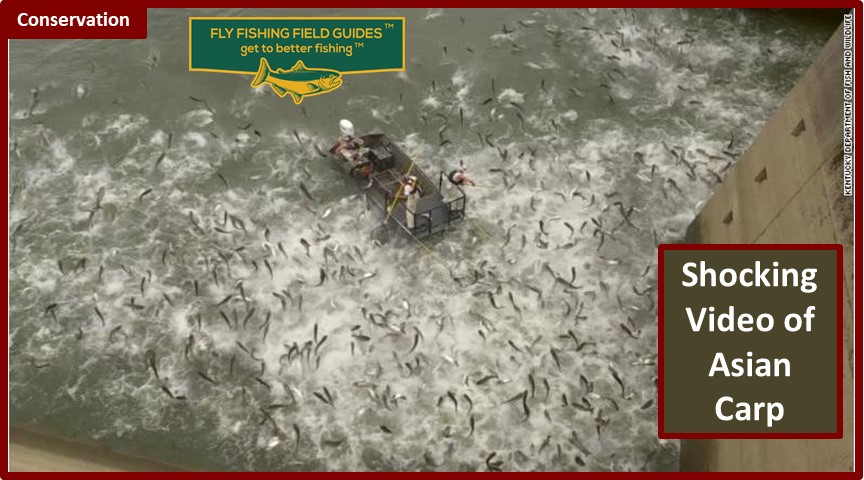 This video is pretty shocking, in more than one way.  Here’s why the growing Asian carp problem must be contained, and how you can help.

Note: we are reader-supported, through affiliate link purchases at no additional cost to you.  Thank you for your support!

What You Need To Know

Asian Carp are proliferating at a rate that’s truly alarming, in many of our waterways especially in the mid-west.  Asian Carp are able to reproduce very quickly, because the females are capable of laying over one-million eggs in a year.  Moreover, they are able to consume aquatic food resources at a voracious rate. As a result, they are competing with resident sport fish species in a big way.

This video, made by the KY Department of Fish and Game as reported by Cable News Network, shows just how serious this problem has become.   As many state fisheries agencies do, they are using an electro-shocking setup.  The rig sends enough electrical current into the water to stun many, and at least scare most of the fish within a given radius of the boat.

Electo-shocking may sound severe, but it actually gives the fisheries scientists a humane way to do a fish count.  The vast majority of fish swim away from the boat, and most are only temporarily stunned.  Some of those are netted, and along with the very few that are injured are sold for processing.

This practice is very common for fisheries agencies to do fish count studies.  It helps inform us about the health of the fisheries, and provides information used as the basis for management practices and policies.

Bottom line, this video is quite shocking.  It reveals just how many carp have become intruders in this waterway.  It’s clear that resident bass and other game fish will have a very hard time competing with the dense school of Asian carp.

This project is working to keep the Asian carp from getting into lake Barkley.  The situation has become so serious, that tourism is actually threatened. 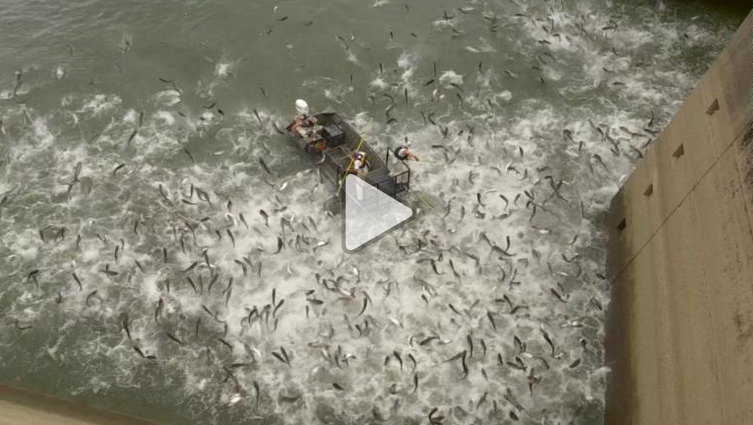 How Extensive Is The Asian Carp Problem?

At this point, quite a few states in the Midwest are working furiously to keep the Asian carp from getting into the great lakes.  Not only that, but trying to prevent them from expanding into other waters in their respective states.  All told, it’s pretty shocking just how wide-spread the Asian Carp problem has become.

The situation demands extreme measures.  For example, an open water electric cable in the Illinois river prevent migration to Lake Michigan.  Another measure is “bio barriers” made of extensive bubblers.  Beyond that, sound- and light-waves deter the carp.  Scientists are constantly testing new ideas to find the most effective solution.

How can you help?  For starters, if you want to earn a little extra money on the side, be sure to check with your state fish and game department.  Increasingly, bounties and even commercial fishing permits are being issued to help control these rapidly-expanding invasive fish.

How Did Asian Carp Get Here?

Originally, Asian carp were fish farmed in ponds without the intention of releasing them into the wild.  However, flooded river basins gave them an opportunity to escape.

Starting in the 1970s, four types of Asian Carp were allowed to be exported, mostly into ponds in the Mississippi watershed.  They were also brought into the Missouri and Illinois basins.  They are good at cleaning up algae blooms.  In addition, they were farmed to serve the asian-culture market in the USA.

Perhaps hindsight is 20/20 because looking back, it may seem obvious would become a problem.  However, that just was not the mode of rationale at the time.

Asian Carp have actually been known to jump up to 10 feet out of the water, even landing in boats.  Asian Carp are actually quite sensitive to sounds.  When a boat motor approaches, especially a fast boat, they just don’t have time to get out of the way.   So they jump in an effort to get away from the sound.

An avid fly fisher for over 40 years, Mark has lived and fly fished WA, MI, CA, PA and NY along with countless trips to other places. He can’t get enough of the water; white water kayaking, rafting, drift boating, and hiking to alpine lakes.

Next Article: The Best Waders For Men

Watch Video: You May Be A Fly Fishing Nut If….

Skill Spotlight – 7 Tips For Fishing With Stealth
Scroll to top